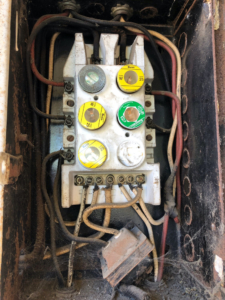 On occasion during my home inspections i come across an early 1900’s home that still has its original electrical system in place. I do scratch my head when i see this still in service because it is over 100 years old and i figure the occupants are probably tired of replacing fuses when they blow.

An electrical fuse is made up of a piece of metal that melts when overheated. A circuit breaker has an internal switch mechanism that is tripped when an unsafe surge of electricity occurs. Fuses tend to be quicker to interrupt the flow of power, but must be replaced after they melt, while circuit breakers can usually simply be reset.

Fuse box’s are considered functionally obsolete and are no longer installed in newer homes, fuse box’s are typically installed in older homes that where built pre 1960. Upgrading the fuse box to a modern day circuit breaker type electrical panel is a highly recommended upgrade for your home. You should have your entire electrical system further evaluated by a qualified licensed electrical professional because with fuse box’s comes antiquated electrical wiring which is also considered obsolete and should be replaced.

The electrical system is an important system to inspect when buying homes built in the early 1900’s even if they where remodeled. I have seen a few flipped homes that still have antiquated wiring still in service connected to newer wire in attics or crawlspaces.

GET YOUR HOME INSPECTED

Want to join the discussion?
Feel free to contribute!

Have Me Call You!

How To Inspect Fireplaces for Safety Hazards